Trees we will be offering for sale: 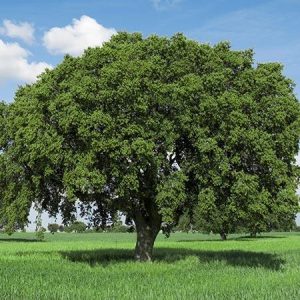 Tree Description: A large, stately tree, commonly to 50 feet tall with a short, stout trunk of 4 feet or more in diameter, dividing into several large, twisting limbs that form a low, dense crown that can spread more than 100 feet, the limbs often touching the ground in open-grown settings.

Range/Site Description: Occurs on well-drained soils in the southern coastal plain, from Virginia through the Atlantic and Gulf states and into Texas, west to the Balcones Escarpment and south to Hidalgo county. Widely planted as a landscape tree in Texas.

Leaf: Simple, alternate, evergreen, thick, and leathery; oval, oblong, or elliptical in shape, 2″ to 4″ long and 0.5″ to 2″ wide; smooth, glossy, and dark green above, pale and silvery white beneath. Leaves can sometimes be toothed, especially towards the tip.

Fruit: An acorn, requiring one year to mature, about 1″ long and 0.5″ in diameter, oblong, dark brown and shiny, set about one-half its length in a gray, downy cup that is borne on a long stem or peduncle.

Similar Species: Texas live oak (Quercus fusiformis) occurs north and west of the Balcones Escarpment in Central Texas and tends to be smaller and multi-trunked. Mexican blue oak (Q. oblongifolia) is a rare evergreen oak that occurs in West Texas.

Interesting Facts: Live oaks were once prized for their naturally curved limbs and trunk, used by shipbuilders in the 18th Century to fashion the ribs and planking of tall sailing ships, such as “Old Ironsides.” Refitting that ship in the 1980’s included specialty pieces cut from live oaks in Texas that had been killed by the oak wilt fungus. 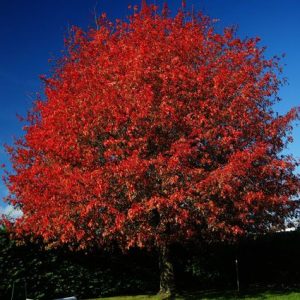 Tree Description: A large forest tree reaching heights of 100 feet or more and a trunk to 3 feet in diameter, with a wide-spreading, symmetrical crown. It often occurs as a single tree or in small groups in forest stands, and is an excellent landscape tree.

Range/Site Description: Occurs in East Texas on well-drained alluvial soils and on fertile slopes, west to the Balcones Escarpment near Austin and San Antonio and then northeast to Dallas and the Red River.

Leaf: Simple, alternate, 6″ to 8″ long and 4″ to 5″ wide, usually with 7 to 9 bristle-tipped lobes (rarely 5), the widest lobes on the upper half of the leaf, with one or more pairs of deep, rounded sinuses between the lobes. Leaves are glossy, dark green on top, light green and smooth beneath, except for small tufts of pubescence in the axils of the veins.

Bark: Dark gray, smooth and tight at first, but developing flat, interlacing ridges and rough fissures with age. Old trees can have deep fissures between the smooth ridges.

Interesting Facts: This species was named for Benjamin Franklin Shumard (1820-1869), a former state geologist of Texas who organized the the first comprehensive geological survey of Texas. 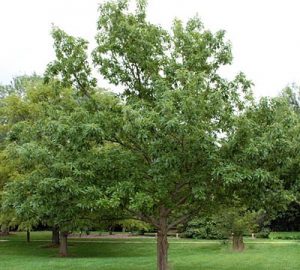 Tree Description: A medium or large tree reaching a height of 70 feet and a trunk to 3 feet in diameter, with a rounded crown of glossy, green foliage. It is also planted widely as a shade tree suitable for limestone soils.

Range/Site Description: Occurs from northeast Texas to Central Texas and south to the Guadalupe River, and also in the mountains of West Texas, growing on mostly limestone soils, especially at the base of bluffs and along stream courses.

Leaf: Simple, alternate, oval to elliptical or oblong in shape, 4″ to 6″ long and 1.5″ to 2″ wide, leaf edge rather sharply toothed but without bristle-tips, teeth slightly recurved.

Fruit: An acorn, requiring just one season to mature, 0.5″ to 1.25″ long, light to dark brown when ripe, enclosed by one-half its length byt the bowl-shaped cup. Acorn is edible if roasted.

Interesting Facts: Chinkapin oak is named because of the resemblance of the leaves to the Allegheny chinquapin (Castanea pumila), a relative of American chestnut (C. dentata).

Tree Description: A medium-sized oak to 40 feet tall and a trunk to 2 feet in diameter, with a broad, rounded crown.

Range/Site Description: Naturally occurring only in one known U.S. population, near the Devil’s River in Val Verde county, but more common in Mexico. Now planted widely as a landscape tree.

Leaf: Simple, alternate, 2″ to 5″ long, highly variable, but often with several shallow lobes or teeth towards the tip. Leaves are thick, leathery, and semi-evergreen, with distinct raised veins on the yellowish underside. New leaves in spring are peach-colored and in colder climates the leaves are late-deciduous and turn yellow-brown.

Fruit: An acorn, maturing in one year, up to 1″ long and enclosed one-half by the acorn cup.

Wood: Primarily used as a landscape tree in the nursery trade, and often sold as ‘Monterrey oak.’

Similar Species: Netleaf oak (Quercus rugosa) has similar venation on the undersides of leaves, but has obovate leaves and is restricted to high elevations in West Texas.

Interesting Facts: Only recently discovered in the U.S. (1992) as a native tree species, but widely available in commercial nurseries. 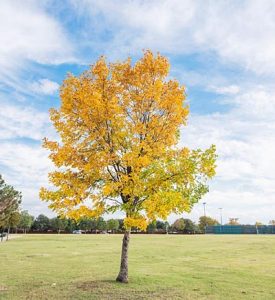 Tree Description: A large tree to 75 feet tall with a tall straight trunk 2 to 3 feet in diameter and stiff branches that form a narrow, oblong crown.

Range/Site Description: The most common elm tree in Texas, distributed widely in East, South, and Central Texas. Most often found near streams, in solid stands on flatwoods near rivers, or on dry limestone hills. Also planted widely as a landscape tree.

Leaf: Alternate, simple, 1″ to 2.5″ long and 0.75″ to 1″ wide, oval to elliptical in shape, finely-toothed or sometimes double-toothed along the margin, and blunt at the tip. The upper surface is dark green, shiny, and rough, while the lower surface and petiole are pubescent. Twigs sometimes have thin, corky “wings” and the leaves can turn gold to orange-red in the fall.

Flower: Appear in late summer or autumn as hairy, short-stalked clusters in the leaf axils.

Fruit: An oval “samara,” 0.25″ to 0.5″ long, the seed centered in the middle of the wing, deeply notched at the tip and hairy all over, especially along the margin. Seeds are borne in the fall, which distinguishes this species from the other native elms.

Wood: Reddish-brown, brittle, with a thick layer of light-colored sapwood. The wood is sometimes used to manufacture wheel hubs, furniture, and fencing. Commonly sold in the nursery trade as a landscape tree.

Similar Species: Winged elm (Ulmus alata) has larger leaves and seeds that mature in spring; varieties of Chinese elm (U. parvifolia) have similar leaves, but the bark is distinctly orange and flaky. 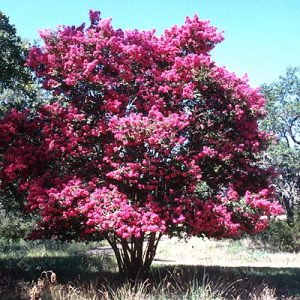 Tree Description: Perhaps the most common small landscape tree or large shrub planted in Texas, crapemyrtle is usually multi-trunked with smooth, muscular limbs, grows to 20 feet tall and 15 feet wide, with mature trunks ranging from 4″ to 12″ in diameter.

Range/Site Description: Native to China and Korea, it performs well as a landscape tree across most of Texas. It tolerates a wide range of site conditions, including drought and slightly alkaline soils.

Leaf: Simple, alternate, 1.5″ to 3″ long, oval to oblong, thin, blunt-tipped, without teeth along leaf edge. Some cultivars turn red or orange in the fall.

Flower: Showy spikes of white, pink, red, or purple flowers appear throughout the summer, each made up of petals that resemble crepe-paper. Not fragrant.

Fruit: An upright spike of round 0.5″ diameter green fruits develops in late summer, drying to brown spherical capsules that open to release the winged seeds up to 0.25″ long.

Bark: Smooth, muscular, in irregular patches ranging from tan to chocolate-colored, peeling during the growing season into long, thin strips that fall away to reveal new bark beneath.

Wood: Hard, dense, light-colored; no commercial uses. Major economic value is in the nursery trade; many cultivars are available, with selections from the National Arboretum the most pest-resistant.

Interesting Facts: A common – but incorrect – pruning practice of removing the entire top of the tree each winter is called “crape murder.”

Note: All tree information is from:  http://texastreeid.tamu.edu/